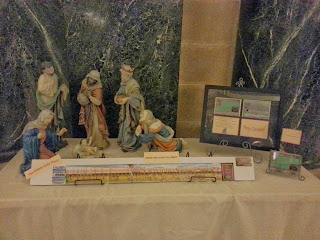 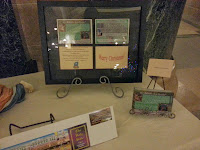 The promise of the Father to send the Son came to Adam and Eve in the garden after they sinned and began to die. Our redeemer came 2,000 years ago. Born to die...
Genesis 3:15, And I will put enmity between thee and the woman, and between thy seed and her seed; it shall bruise thy head, and thou shalt bruise his heel.
Galatians 3:13, Christ hath redeemed us from the curse of the law, being made a curse for us: for it is written, Cursed is every one that hangeth on a tree.
1Co 15:22,  For as in Adam all die, even so in Christ shall all be made alive.

To see this Christmas display, visit the 1st floor rotunda in the state capitol in Madison, WI.
Posted by Profile at 8:03 PM

The discoverer of soft tissue in dinosaur bone now has a new explanation for its preservation – but does it really answer the obvious question? According to Live Science, Mary Schweitzer’s “controversial T. rex soft tissue find” has been “finally explained.” The answer is: iron. The iron in hemoglobin acts like a formaldehyde, preserving the delicate proteins and stretchy blood vessels. But does it really preserve it for up to 145 million years? A press release from North Carolina State describes the hypothesis coming from theory and from experiment. In theory, iron atoms must be guarded against in cells because of their reactive potential. After death, though, reactive iron becomes a guardian of preservation, because it forms cross-links with proteins, preventing them from decay. (This process also makes soft tissue hard to detect, Schweitzer says.) The experimental part involved soaking recently-killed ostrich bone in water and in blood. The water-soaked bone decayed into a goopy mess in less than a week. Because of iron in hemoglobin, the blood-soaked soft tissues remained “recognizable” for two years at room temperature, retaining their basic structure. The press release is tentative, saying iron “may be the key” to preservation, “may play a role” in preserving ancient tissues, and, in Schweitzer’s words, “may be both the mechanism for preservation and the reason why we’ve had problems finding and analyzing proteins that are preserved.” The article does not deny the authenticity of the soft tissue, but only tries to offer an explanation for the unexpected preservation. Stephanie Pappas in the Live Science article gave some emphasis to the “controversial” nature of the “seemingly impossible” soft-tissue claim. “The find was also controversial, because scientists had thought proteins that make up soft tissue should degrade in less than 1 million years in the best of conditions,” she wrote, but then acknowledged that, despite alternate theories, the 2005 claim and subsequent soft tissue finds in even older dinosaur bones (145.5 million evolutionary years) proved real. Schweitzer noted that scientists often don’t see what they don’t expect to see: “The problem is, for 300 years, we thought, ‘Well, the organics are all gone, so why should we look for something that’s not going to be there?’ and nobody looks,” she said. The obvious question, though, was how soft, pliable tissue could survive for millions of years.… The new explanation may be welcome news for evolutionists. Pappas writes, “Dinosaurs’ iron-rich blood, combined with a good environment for fossilization, may explain the amazing existence of soft tissue from the Cretaceous (a period that lasted from about 65.5 million to 145.5 million years ago) and even earlier.” Armed with better techniques, Schweitzer’s team is going to go hunting for more dinosaur soft tissue next summer. Hold your hadrosaurs; this does not solve the evolutionists’ problem. For one thing, Schweitzer and, independently, Mark Armitage, found osteocytes (bone cells) in their samples, not just blood vessels. The osteocytes retain their original structure, including their delicate dendrites. For another, two years of preservation is .000001% of 145 million years. On what basis can they justify extrapolating such exquisite preservation that far, when the ostrich bone was “recognizable,” indicating some degradation had occurred? Nobody on earth has “experienced” 65 million years, let alone a few thousand (provided that written records can substitute for personal experience). The evolutionists are assuming the long ages, not demonstrating them. In spite of this strong evidence against millions of years, they are hanging onto that belief like a baby gripping its pacifier. The articles betray a subtext of desperation. Pappas described the soft-tissue claims as “amazing” and “seemingly impossible.” They seem relieved that this iron hypothesis “may” provide an answer. Yet other admissions in the articles support the creationist Flood interpretation. “The bones of these various specimens are articulated, not scattered, suggesting they were buried quickly,” Pappas noted. “They’re also buried in sandstone.…” Try to imagine circumstances in which a T. rex strutting across a desert suddenly became completely buried, such that burrowing creatures were unable to reach it and disarticulate it. There aren’t too many options available. Even so, up till the surprising discovery by Schweitzer, “scientists had thought proteins that make up soft tissue should degrade in less than 1 million years in the best of conditions.” They weren’t looking for it; they were shocked when they saw it with their own eyes. For years they have been scrambling to answer the “obvious question” – how soft, pliable tissue could survive for millions of years.” Have they ever considered the obvious answer? It can’t, and it didn’t. The evolutionists show no shame for their falsified long ages. Instead, they boast as if they will find soft tissue millions of years older! They are like the delusional man in a joke who claimed he was dead. His doctor attempted to prove him wrong, asking, “Do dead men bleed?” The man replied, “No, dead men do not bleed.” The doctor proceeded to prick him with a needle, showing blood oozing from the man’s arm. “Well, I’ll be darned! Dead men do bleed!” Like the delusional man, evolutionists will never give up their belief in millions of years, even when the facts bleed otherwise right in front of their eyes. We welcome more exploration by the Schweitzer team and anyone else with access to fossils and the equipment to analyze it. Let the data that “nobody looks” for come to the surface. - See more at: http://crev.info/2013/11/dinosaur-soft-tissue-explained/
Posted by Profile at 7:19 PM