This one is about "human evolution" and explains the "evidences" and frauds.

https://www.youtube.com/watch?time_continue=3&v=_DUS3wCnXy0
Posted by Profile at 6:47 PM

If you want to experience New Testament times simply go out and teach God's Word to our culture. It will happen! We are commanded to speak the truth in love. That we did Tuesday evening at the speaking event hosted by What's the Evidence? Some mocked and others said we will hear you again! I want to thank you all for praying for this event. We saw the Lord working. Here's a short recap: We were at the posted capacity of 35, plus the 5 of us from the team. It was a diverse crowd of Christians, college age, older folks, a current school board member, 3 former school board members, a friend who brought a young Muslim woman, 2 men who seemed to come just to be disruptive, and the local LGBTQ representation. Randy did an excellent job laying the foundation of Genesis. He used lots of Scripture about creation, mankind (male and female) made in God's image, marriage, sin and the fall, the promised Savior, Noah's flood and Babel. He put some science into the topics, and brought up racism, Darwinism and Darwin's ideas about women and the "savages", Margaret Sanger, evolution taught in schools and the icons of evolution and the hope that we can get back to teaching just science in school. He ended by comparing worldviews, Biblical vs Secular and how each affects how people live. We experienced that during the Q and A time! A lot to cover but it was very good!!

Yes, humans are fearfully and wonderfully made in God's image.

Just last month a separate team reported the discovery of a whole new class of neuron unique to humans. They called them rosehip cells based on their shapes.2 We don’t yet know what they do, but since they make up 10 percent of our neurons, future research will surely reveal their important function. 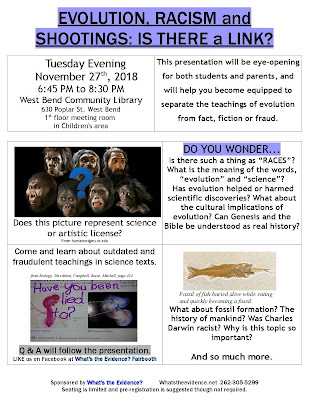 This event is being held at, not sponsored or organized by
the West Bend Community Memorial Library or the
City of West Bend.
Posted by Profile at 12:27 PM

Transformed by the Evidence

I have been fascinated by the stories of Christian scientists who once believed in evolution, but were, Transformed by the Evidence.
When I was in high school, and even microbiology in nursing school a few years ago, I learned that DNA was read in one direction. There was no mention of layering or backwards coding. Jay Seegert, a creation speaker, talks about the dynamics of DNA in one DVD.
And in his book Transformed by the Evidence, by Jerry Bergmann Ph.D he includes the account of Tom Hennigan, who is an associate professor of biology at Truett-McConnell College. Mr. Hennigan gives a stunning analogy of DNA complexity.
Let me quote what he wrote regarding the complexity of DNA. He explains that DNA is made up of "multiple instructions embedded within multiple instructions in multiple directions." He goes on to explain, "if you read the book from front to back, you would learn all about building a car. If you read it from back to front, you would learn how to design the electrical circuitry of a house. Starting in the middle and reading forward then backward you could learn a new language or, alternatively, if you began reading in the middle, reading backward, and then forward, you would learn calculus. The complexity is mind boggling and inconsistent with random natural process.

Addendum:
This book, "Transformed by the Evidence"  has been so phenomenal! Men and women are coming to know Christ, or develop a deeper walk with Him because of the evidence leading to belief in a historical Genesis chapters 1-11. This is too good to not share:

The Case from Science by Jay Seegert

SEMINAR TOPIC: The Case from Science

Examining Creation vs. Evolution
Origin of the Universe
Origin of Life
Origin of Species
Origin of Design
Posted by Profile at 9:39 PM

Enjoy some pictures from the summer fairs


Check this out! Yes, the Biblical Flood was real.
Posted by Profile at 7:17 AM

New Friends in the Booth 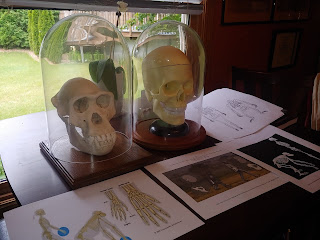 Check out our newest display for the What's the Evidence? fairbooth. We plan to highlight the differences between man and animal and emphasis that man was created in God's image with very unique design and capabilities. Because man was created in God's image he has the responsibility to serve his Creator. Yet, God gives us a choice about who we will serve. We hope you choose Him!
It's been a lot of fun learning about this. Come visit us and learn, too.
The video below discusses the uniqueness of man:
https://www.youtube.com/watch?v=2MvJbwA9SZQ
Posted by Profile at 12:32 PM

There are several topics folks get confused about when it comes to "evidence" for evolution.
ICR (Institute for Creation Research) has put out some short (under two minutes), very informative videos. Topics include: Human Evolution, Climate Change, Junk DNA, Noah's Flood, Whale Evolution, the Big Bang, Population Growth, Carbon-14 Dating, Dinosaur Tracks, Cell origin and MORE.
Check this out:
http://www.icr.org/thatsafact
Posted by Profile at 11:57 AM

Good one to watch and become informed

Share Email Facebook Twitter Google+
Evolutionary biology is experiencing its most serious division over the structure of evolutionary theory since the development of the Modern Synthesis nearly 100 years ago. Last November, Great Britain’s prestigious Royal Society (The Royal Society of London for Improving Natural Knowledge) held a conference to deliberate if evolutionary theory needs to be “extended” or even renovated to accommodate fresh ideas from new discoveries. The article Schism and Synthesis at the Royal Society in the current issue of Trends in Ecology & Evolution by a conference organizer explains why “the discussion witnessed little meeting of minds.”1
The vital importance of this conference was framed in the science journal Nature in a point-counterpoint-style article, “Does evolutionary theory need a rethink?”2 They note that “researchers are divided over what processes should be considered fundamental.” A division over basic processes at the core of any theory suggests that the theory is incomplete, based on misleading research, or broken.
One researcher advocating for a major revision in evolutionary theory (modestly labeled the Extended Evolutionary Synthesis, or EES) is Kevin Laland of the University of St. Andrews. He said that “the data supporting our position gets stronger every day. Yet the mere mention of the EES often evokes an emotional, even hostile, reaction among evolutionary biologists. Too often, vital discussions descend into acrimony, with accusations of muddle or misrepresentation.”2 The bitterness, per Laland, is generated since “this is no storm in an academic tearoom, it is a struggle for the very soul of the discipline.”
*Dr. Guliuzza is ICR’s National Representative. He earned his M.D. from the University of Minnesota, his Master of Public Health from Harvard University, and served in the U.S. Air Force as 28th Bomb Wing Flight Surgeon and Chief of Aerospace Medicine. Dr. Guliuzza is also a registered Professional Engineer.
Image Credit: Copyright © 2017 The Royal Society. Adapted for use in accordance with federal copyright (fair use doctrine) law. Usage by ICR does not imply endorsement of copyright holder.
Article posted on May 18, 2017.

Digging Past the Doubts

by Bryant Wood on October 1, 2015; last featured December 31, 2017
Audio Version
Share:
Today most archaeologists claim that no evidence supports the Bible’s claims about many Old Testament events. There is a problem, but it’s not with the evidence.

Shop Now
Have you ever tried to share your faith and heard these ominous words? “But archaeology has disproved the Bible!” If you haven’t, it’s coming soon. As our Western culture increasingly abandons all semblance of Christianity, more and more people think the Bible is just a bunch of myths.
Perhaps you’ve been taught to respond confidently: “Recent discoveries have forced archaeologists to admit the reliability of Old Testament history.” But the answer is much more complicated than that. In fact, most experts are now saying just the opposite. They’ve been looking very hard for evidence of biblical events, but nothing has turned up, they say.
So if you don’t know how to respond to these questions, your gospel presentation could effectively end right there. Answers really do matter.
The short answer is encouraging. Archaeologists have found evidence that supports the Bible, but many times the evidence is ignored because of preconceptions about the Bible’s historicity, or their dates or places are wrong for the biblical events. The longer answer is even more exciting. Any supposed contradictions turn out to be human errors, not Bible errors. Consider five of the most common examples.
Entire Article HERE
Posted by Profile at 6:03 PM

Evidence for Creation › Evidence from Science › Evidence from the Life Sciences › All Life Systems Were Created by God › DNA Was Created as a Reservoir for the Information of Life
The whole concept of how life originated is an insurmountable naturalistic hurdle. Life requires DNA, RNA, and protein in an interdependent triad in which each molecule is wholly dependent on the other two to exist. It’s worse than a chicken and egg scenario. Furthermore, since each type of molecule carries and conveys complex encoded information, an intelligent information provider is the only logical cause of this information source. Code implies a coder.
Shortly after the largely unfruitful origin of life research on amino acids by Miller and Urey in the 1950s,1scientist Alex Rich speculated in 1962 that RNA may have been the first biomolecule to spontaneously evolve. That first RNA biomolecule would possibly have both informational and enzymatic properties, thus omitting the original necessity of DNA and proteins.2 This idea slowly gained traction and eventually became more popular in the 1980s with discoveries that some types of RNA were involved in enzymatic-like reactions in the complex processing of RNA transcribed from genes. One of the main researchers in these discoveries was Scott Gilbert who coined the term “RNA World.”3
Since the late 1980s, researchers explored many aspects of the evolutionary possibilities related to RNA being the first biomolecule, but have found nothing but obstacles including no method of spontaneously forming RNA or its nucleotide building blocks. In fact, a secular scientist published a 2012 paper expressing this great frustration titled, “The RNA world hypothesis: the worst theory of the early evolution of life (except for all the others).”4
*Dr. Jeffrey Tomkins is Director of Life Sciences and earned his Ph.D. in genetics from Clemson University.
Article posted on January 15, 2017.
Posted by Profile at 3:19 PM