23 guests attended our first one-night seminar on the Age of the Earth and Carbon Dating at the West Bend library. Feedback included comments like:
Very thought-provoking, interesting and relevant, good explanation of carbon dating, very good presentations, great information, riveting, and excellent explanation about underlying assumptions of carbon dating...
Attendees took home the DVD, God of Wonders, and other resources for themselves and to share.
Thank you Randy and Joe for your wonderful presentations!
We are considering a one-night seminar this winter on the topic of dinosaurs. 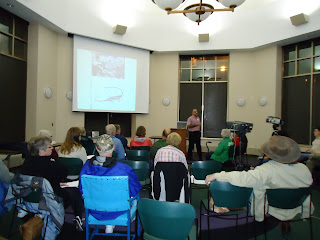 Labels: Age of the Earth, Creation Scientists, Fossils and Sedimentary Layers, Genesis and Creation, God of Wonders DVD, What You May Not Know about Evolution

A part-time nurse from West Bend, Wisconsin, set up an interactive creation-based booth with a sign reading "Interpret the Evidence" at a local county fair. The Wisconsin State Journal reported on Mary Weigand's booth with the headline "Creationist seeks to debunk scientific fact at Dane County Fair."1 But was she actually trying to debunk "scientific fact," or was this headline just a mudslinging smear?
By examining fossils on display, booth attendees investigated for themselves whether or not fossils show a gradual transition between life forms, as Darwinism predicts. The booth presented an alternative scientific explanation that appears to fit the fossil data much better. Each visitor was left to discern whether fossils show discrete created kinds with no undisputed transitions between forms, as biblical creation predicts.2
The news response to this booth claimed that the idea that the world is thousands of years old is incompatible with "techniques such as radioactive isotope dating." Supposedly, these techniques "repeatedly conclude that some geological features are hundreds of millions of years old."1 But what if overwhelming scientific evidence actually demands that the world is thousands, not millions or billions, of years old, and that the radioisotope dating techniques are unreliable? Weigand may well be familiar with these reports, unlike the State Journal reporter and the evolutionists he interviewed.
Scientific evidence has clearly shown radioisotope dating to be completely untrustworthy.3 Radioisotope-derived ages are typically in conflict with other published results that use different isotopes, or even the same isotopes published at different times. Radioisotope age assignments of rock samples of known age have always reported at orders of magnitude older than the real age of the rock. For example, a 10-year-old rock that formed in the crater of Mount St. Helens was dated at 350,000 years, while another technique dated the same rock at over two million years.4
A Wisconsin-based evolutionary botanist said that the booth "is a testament to the power of belief and the difference between belief and science."1 But his statement is wrong, because it assumes that science does not involve belief, when in fact belief is a fundamental requirement for operational science. Prior to investigation, any scientist must first believe that the world operates according to regular principles, that his or her study results will meaningfully correlate to reality, and that there is such a thing as truthful reality. These beliefs find their foundation only in biblical Christianity.5
The assertion that science is separated from belief also wrongly assumes that belief in creation does not involve scientific examination of evidence. This assumption is convenient if a person prefers to ignore the reams of scientific evidence that point to recent, special creation.6
The claim that this booth is attempting "to debunk scientific fact" is apparently a shallow slander. Instead, it looks as though Weigand and her sponsors actually promote just the opposite approach: Encouraging people to do better science by interpreting hard evidence using common sense, instead of relying on the dogmatic propaganda that is necessary to prop up evolution's failed paradigm.

References
* Mr. Thomas is Science Writer at the Institute for Creation Research.
Link to article
Posted by Profile at 5:50 PM

Labels: Age of the Earth, Fossils and Sedimentary Layers, Summer Fairs, What You May Not Know about Evolution

How Old is the Earth?

We just finished two fairs. We had a great time and lots of interest. One question came up a lot. Folks are interested in the age of the earth. Below is an excerpt from an excellent chapter on the topic from the book, Refuting Evolution by Jonathan Sarfati, Ph. D.

A handbook for students, parents, and teachers countering the latest arguments for evolution
by Jonathan Sarfati, Ph.D., F.M.

How old is the earth?

For particles-to-people evolution to have occurred, the earth would need to be billions of years old. So Teaching about Evolution and the Nature of Science presents what it claims is evidence for vast time spans. This is graphically illustrated in a chart on pages 36–37: man’s existence is in such a tiny segment at the end of a 5-billion-year time-line that it has to be diagrammatically magnified twice to show up.
On the other hand, basing one’s ideas on the Bible gives a very different picture. The Bible states that man was made six days after creation, about 6,000 years ago. So a time-line of the world constructed on biblical data would have man almost at the beginning, not the end. If we took the same 15-inch (39 cm) time-line as does Teaching about Evolution to represent the biblical history of the earth, man would be about 1/1000 of a mm away from the beginning! Also, Christians, by definition, take the statements of Jesus Christ seriously. He said: ‘But from the beginning of the creation God made them male and female’ (Mark 10:6), which would make sense with the proposed biblical time-line, but is diametrically opposed to the Teaching about Evolution time-line.
This chapter analyzes rock formation and dating methods in terms of what these two competing models would predict.

...........(Click on link to continue reading.)http://creation.com/refuting-evolution-chapter-8-how-old-is-the-earth
Posted by Profile at 1:18 PM

Labels: Age of the Earth

The Wisconsin State Journal featured us on the front page today. While the article is a bit biased, it certainly brings up the point about the age of the earth and whether or not fossils can be used as evidence for evolution or not. To read the article click HERE.
Now, I certainly would like to see a debate on the UW Madison campus this fall between either Mr. Waller or Mr.Byers and a Creation scientist. Any takers?
Posted by Profile at 5:30 PM

Stop by the Dane County Fair or the Waukesha County Fair this week (July 20-24) and pick up a free DVD called God of Wonders.
Watch DVD trailer here

Yesterday my daughter and I went to the Geology Museum in Madison. With camera in hand we captured  an impressive display of pictures of plants and animals called "Living Fossils". These are creatures alive today, but said to be found in the fossil record "millions of years ago". We took many more pictures than are shown here.
Look closely at the pictures. You might think you are looking at pictures of live creatures.They beg the question, "Does the fossil record disprove evolution?"

2011 Summer Dates and Locations in Wisconsin

If Evolution were true, would we expect to find modern animals in the fossil record?

Many modern animals in dinosaur rock! 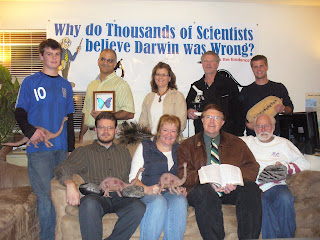 I love chickens. My wife loves chickens. (Well, sort of.) We own seven of them, and my children love collecting the beautiful brown, white, and yes, even green eggs every morning for breakfast. In fact, we thank God for chickens and are all proud members of PETA (People for the Eating of Tasty Animals).
Have you ever stopped to consider that there’s more to an egg than how good it tastes? It’s like a little space capsule. Inside the capsule, two lifelines tether a tiny astronaut (the chick) to the food supply (the yellow part called the yolk) and the outside oxygen source.
10,000 tiny holes in the capsule’s shell allow oxygen to come in and carbon dioxide wastes to go out. The shell is also coated with something called “bloom,” which keeps dust out of the holes and fights bacteria.
As he grows, the astronaut is strapped safely into the center of the capsule by two strong bungee cords attached to opposite ends of the shell. He is further protected by a dense, shock-absorbing liquid (the “white” of the egg) filled with protein and a powerful enzyme called lysozyme.
Also found in human tears, this enzyme kills bacteria on contact. This germ-buster explains why our eyes don’t become infected, even though they are constantly exposed to bacteria.
A few days before the astronaut emerges from the capsule, a special tool grows on the tip of his beak called an “egg tooth.” He first uses this tool to open a special air sac in the capsule, which gives him six hours of oxygen, which he desperately needs before breaking out. Fueled with this oxygen, the little fellow uses his egg tooth to crack the shell of the capsule and spring forth into a new world.
The day before he hatches, he swallows the entire food pack (the yolk), giving him three days of food and water before he gets on his feet and finds nourishment on his own. Clearly, the egg is a marvel, designed by a creative genius.

Photo courtesy of Kirk Cameron
So the next time you hold an egg in your hand, remember the wonders of the God who made it. Then, break out of your shell and share your faith with an unsaved friend. Don’t be a chicken.
Just open the fridge and say to your friend, “Hey . . . have you ever seen a miniature space capsule?” Then let him hold the egg, as you share with him what you’ve learned. Use the egg as a springboard to talk about the genius of our wonderful Creator, and show your friend how to know Him through faith in Jesus Christ.


Kirk Cameron, husband and father of six, is best known for his roles in the TV series hit Growing Pains and in the Left Behind movie series. Kirk’s newest role is in the upcoming film Fireproof from Sherwood Pictures, set to release this August.
Posted by Profile at 5:42 PM

Labels: Genesis and Creation, What You May Not Know about Evolution, Wonders of Creation
Newer Posts Older Posts Home
Subscribe to: Posts (Atom)