Non-stop. That describes the activity at the Dane County Fair yesterday. Great conversations, sharing evidences, sharing Christ, answering questions, talking about the Flood, fossils, creation, God's Word. Wow, Three of us were so busy reaching out. It was a great day. I heard the booth in Waukesha was also busy, plus they received an award for their booth! Enjoy the pictures and keep praying for folks who come to the booth as well as the workers. We are only half way through fair season! To God be the glory. 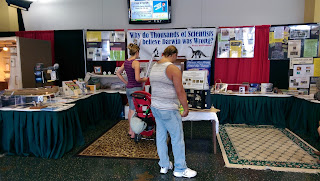 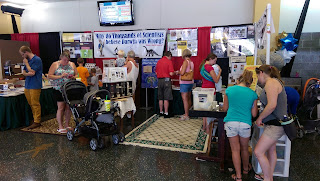 by William A. Hoesch, M.S.*  http://www.icr.org/i/pdf/btg/btg-211.pdf
Lucy, to TV audiences of the 1950s and 1960s, was a spunky red-headed actress. To our more educated schoolchildren today, however, “Lucy” means somethingquite different. She is the celebrated fossil that appears in textbooks as a hairy, seminaked, upright-walking ape striding boldly across a treeless African landscape. Her jaw is set and she leaves behind her a set of trailing footprints. As the unquestioned icon of human evolution, her fame is comparable to that of the former actress. Why is it that all public school children have heard of this fossil? Let us consider Lucy and her species, Australopithicus afarensis. The human evolution story usually begins with the more primitive australopithocines (literally, “southern apes”) that transition into the genus Homo (or human), through either Homo habilis or Homo erectus, depending on who you talk to. Homo habilis is a mixed taxon of both human and ape remains, and has fallen into disrepute. As for Homo erectus, a great many suggest this category be subsumed into Homo sapiens. Thus “Lucy” and the afarensis fossils occupy a critical place in the human evolution story, squarely between that of the truly apish australopithocines and humans. Lucy’s skeleton was about 40% complete and was a remarkable discovery when unearthed by Don Johanson in 1974.
Posted by Profile at 6:37 PM