Dinosaur Fossils in These Rock Layers?

Evidence for Creation
Evolutionary scientists view Earth’s rock layers as a chronological record of millions of years of successive sedimentary deposits. Creation scientists, on the other hand, see them as a record of the geological work accomplished during the great Flood’s year-long destruction of the Earth’s surface. If that is the case, though, why don’t we find dinosaur fossils in the earliest North American Flood sediment layers—why do we find them only in later Flood rocks? The ICR team’s recent examination of sedimentary rock layers across the United States and Canada seems to provide an answer. 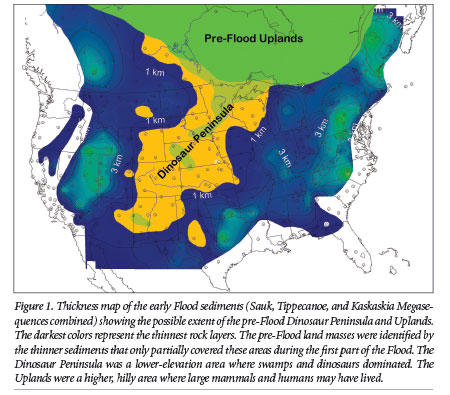 Deposition of the earliest Flood sediments (the Sauk, Tippecanoe, and Kaskaskia Megasequences) was thickest in the eastern half of the U.S.—often deeper than two miles! In contrast, the early Flood deposits across much of the West are commonly less than a few hundred yards deep, and in many places there was no deposition at all (Figure 1).
* Dr. Clarey is Research Associate at the Institute for Creation Research and received his Ph.D. in geology from Western Michigan University.
Cite this article: Tim Clarey, Ph.D. 2015. Dinosaur Fossils in Late-Flood Rocks. Acts & Facts. 44 (2).
Posted by Profile at 9:03 AM