Noah and the Nodosaur

Evidence for Creation
"Look now at the behemoth, which I made along with you; he eats grass like an ox. See now, his strength is in his hips, and his power is in his stomach muscles. He moves his tail like a cedar; the sinews of his thighs are tightly knit. His bones are like beams of bronze, his ribs like bars of iron." (Job 40:15-18)
How do dinosaurs fit with the Bible’s history? They certainly existed—their fossil remains are found on every continent. And ancient historical records, including the Bible, chronicle human encounters with large reptiles whose descriptions best match dinosaurs. Could it be that these records show that dinosaurs and humans shared the earth at one time rather than living millions of years apart as evolutionary myth proclaims?
Dinosaurs certainly appear to be extinct now. Those that lived at the time of Noah’s globe-covering Flood drowned or suffocated (except those on board the Ark), as did all land-dwelling creatures with nostrils, according to Genesis 7:22. Fast-moving Flood mud quickly buried some of those outside the Ark. The mud layers covered the creatures’ dead bodies so deeply that scavengers couldn’t reach them, and the mud dried soon enough to preserve their remains as fossils faster than their carcasses could decay. Most, if not all, dinosaur fossil layers also contain fossil water creatures like fish and clams, and this fits the Flood explanation for their demise.
Although researchers have named hundreds of dinosaur species, all of them belong to only about 60 distinct families. These roughly equal the basic dinosaur kinds. That means Noah and his family only had to manage around 120 individual dinosaurs on the Ark... 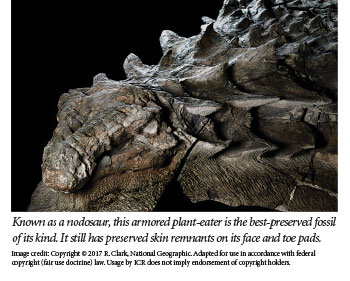 Adapted from “Dinosaurs and Dragon Legends” in Creation Basics & Beyond: An In-Depth Look at Science, Origins, and Evolution.
* Mr. Thomas is Science Writer at the Institute for Creation Research and earned his M.S. in biotechnology from Stephen F. Austin State University.
Cite this article: Brian Thomas, M.S. 2017. Dinosaurs and Dragon Legends. Acts & Facts. 46 (7)
https://www.icr.org/article/10071
Posted by Profile at 12:46 PM